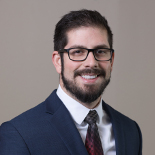 Nicholas Gibson is an associate attorney at National Litigation Law Group.  An Albuquerque native and proud University of New Mexico School of Law graduate, Nick has a passion for advocating for his fellow New Mexico clients.  His extensive experience brings exceptional and competent experience to all his clients.  Before joining NLLG, Nick received his law degree from the University of New Mexico School of Law in 2015.  Nick became a successful attorney working for Fidelity Investments where he negotiated complex corporate contracts ranging from $500 million to $700 million.  After leaving Fidelity Investments, Nick was hired at the Second Judicial District Attorney’s office as a prosecutor for felony criminal cases and was quickly promoted to senior trial attorney in the Major Crimes Unit prosecuting homicides and other serious violent offenses.  Nick then joined NLLG where he defends clients from creditor lawsuits.  Through experience, Nick developed exceptional leadership, advocacy and analytical skills.  Nick applies these skills towards advocating for all his clients to ensure their interests are protected and the best possible outcome is reached.  For Nick, advocating for clients and assisting them in becoming debt-free is the best part of his job.  When Nick is not working, he enjoys golfing and football.