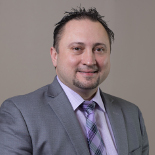 Chrisovalante (Chris) P. Fliakos is an associate attorney at National Litigation Law Group.  He received a Bachelor of Arts in Financial Economics and Political Science from Moravian College in 2001, followed by a Juris Doctor degree from Villanova University School of Law in 2004.  Prior to joining NLLG, he was a litigation attorney with a large creditor’s rights firm based in Philadelphia, PA that represented the largest lending institutions in the nation in all aspects of mortgage foreclosure and ejectment proceedings.  He is fluent in Greek and has been a member of his church’s executive board for the past decade.

In his spare time, he enjoys spending time with his wife and daughter, cooking, traveling and cheering on his favorite sports teams.