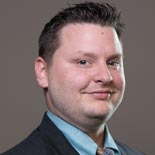 Josh Childers is a Workforce Planner at National Litigation Law Group.  Josh worked over 7 years at the Alorica Call center in Durant, OK, where he was a Sales Operations Team Manager for the DirecTV/Residential Sales Campaign.  Josh was the first agent in Alorica’s history to achieve perfect metrics for the entire month.  He then proceeded to duplicate this achievement for 3 out of the next 4 months before being promoted.  While working as a TM, Josh learned about Excel, reporting, coaching and agent development.  Josh then took on a leadership role within the TMs, where he helped them to achieve the success that he was experiencing, and began developing agents into future Leads/TMs.  During his last year with the company, the Durant site won the DirecTV March Madness competition for CR% for the month.  This was quite an achievement considering they were up against bigger markets such as El Paso, LA and Jacksonville. When Josh’s son Jase (who is now 3!) was born, he left Alorica for other employment so that he could spend more time with his son.  After a short time, he ended up with NLLG and has never been happier.

Josh is ambitious, and most nights after work at NLLG, he drives for Uber.